Today Governor Nathan Deal signed into law House Bill 673, the Hands-Free Georgia Act, Georgia's new hands-free distracted driving law. This blog post, by serious injury and wrongful death lawyer Richard C. Armond of The Armond Firm, LLC, offers an in-depth explanation of the new law. The Armond Firm, LLC, is based in Lawrenceville, Georgia, near the Gwinnett County Justice and Administration Center, and handles cases throughout metro Atlanta and the State of Georgia. Please remember this post is for informational purposes only and should not be relied upon as legal advice.

HB 673 also amends O.C.G.A. § 40-5-57, which sets the points assessed against driver's licenses for various traffic offenses. Effective July 1, 2018, a first violation of the new hands-free distracted driving law at O.C.G.A. § 40-6-241 will be a one point violation, a second violation will assess two points, and a third or subsequent violation will assess three points to a person's driver's license. This appears to be for lifetime violations such that the points will increase up to a third lifetime violation of the hands-free distracted driving law regardless of how far in the past other violations occurred.

Additionally, HB 673 amends O.C.G.A. § 40-6-165, relating to the use of "wireless communication devices" while operating school buses. Essentially, school bus drivers cannot use a "wireless communication device" for any reason while loading or unloading passengers, and they cannot use them while a bus is in motion unless the use is similar to a two-way radio for the purpose of communicating with school officials or public safety officials. 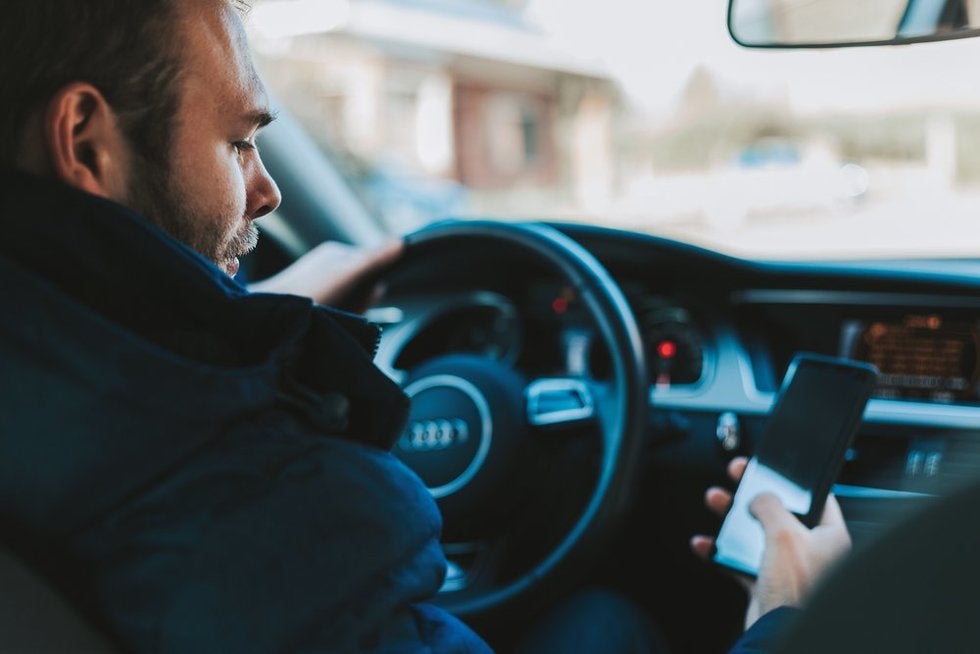 To begin understanding Georgia's new hands-free distracted driving law (O.C.G.A. § 40-6-241), we must understand the definitions of various devices used in the statute.

"' Stand-alone electronic device' means a device other than a wireless telecommunications device which stores audio or video data files to be retrieved on demand by a user."

A "stand-alone electronic device" means anything which stores audio or video that can be viewed immediately, such as an iPod or MP3 player, a GoPro, or for those older readers it would include Walkmans, Discmans, camcorders, etc.

These pertinent definitions are important to understand exactly what is prohibited in the new Georgia hands-free distracted driving law.

The definition of a "commercial motor vehicle" can be found at O.C.G.A. § 40-1-1(8.3) and, generally, involves vehicles used in commerce over a certain weight, passenger capacity, or which transport hazardous materials. When driving a "commercial motor vehicle" the new law, in addition to the prohibitions applicable to all drivers, also makes unlawful at O.C.G.A. § 40-6-241(d):

What appears to be legal under the new Georgia hands-free distracted driving law which may not have been intended?

This appears to be the biggest weakness of the new law. Anyone who has used a GPS knows it can take quite a while to enter this information and can be just as much of a danger to others as texting and driving. OF VERY IMPORTANT NOTE:  it is definitely clearly still illegal to support in one's hand or body a cell phone or any other portable GPS receiver while operating a vehicle, but subsection (c)(2) would allow for using a cell phone or portable GPS while operating a vehicle so long as, for example, the device is laying on the seat or mounted to the dashboard. ALSO OF IMPORTANT NOTE:  Even when using a cell phone or portable GPS and not holding or supporting the device, it will still be illegal to violate the catch-all of O.C.G.A. § 40-6-241(b) to do "anything which distracts from the safe operation of a vehicle."

In criminal/traffic prosecutions, the State will likely not have to prove that a driver was not otherwise lawfully using his GPS on his cell phone--this appears to be akin to an affirmative defense which a person charged could assert, and, if asserted, the State would then have to disprove it. See May v. State, 179 Ga. App. 736 (1986). However, in most traffic citation cases the police are not going to have access to see what was actually happening on a cell phone at the time they observed a potential violation unless a driver gives consent or the police obtain a search warrant to look into the phone. The State may not have evidence to disprove such an affirmative defense if one is truthfully asserted. This may slightly take away some of the teeth of the new statute in prosecutions, but definitely weakens the prevention aspect as drivers can enter info into a GPS so long as not violating the hands-free/support subsection or the catch-all due care/distraction provision.

O.C.G.A. § 40-6-241(g) specifically allows the following four uses of a "wireless telecommunications device" or "stand-alone electronic device" with one major exception to these allowances:

"(1) While reporting a traffic accident, medical emergency, fire, an actual or potential criminal or delinquent act, or road condition which causes an immediate and serious traffic or safety hazard;

(2) By an employee or contractor of a utility services (defined at O.C.G.A. § 40-6-241(a)(2) to basically include what we commonly know as utilities) provider acting within the scope of his or her employment while responding to a utility emergency;

(3) By a law enforcement officer, firefighter, emergency medical services personnel, ambulance driver, or other similarly employed public safety first responder during the performance of his or her official duties; or

(4) While in a motor vehicle which is lawfully parked (again, being stopped at a red light is included in the operation of a vehicle and is not considered being parked)."

However, the major exception is that these acts are not exempt from the catch-all provision of O.C.G.A. § 40-6-241(b) which basically prohibits anything which distracts from the safe operation of a motor vehicle. In other words, it is still against Georgia law to, for example, call 911 while driving to report a crime in progress if it distracts from the safe operation of the car.

In addition to the points on a driver's license explained above, violating any part of O.C.G.A. § 40-6-241 is a misdemeanor.

However, the law allows for first time a person is charged with violating O.C.G.A. § 40-6-241 for the person to be found not guilty if she produces in court a device or proof of purchase of a device which allows for compliance with the statute in the future (example:  earpiece for hands-free calling). It is extremely important to note that anyone taking advantage if this provision must affirm she has not previously used the provision. Along with that, one should know that making a false statement in an official governmental matter or perjuring oneself are both felony crimes which a person might face if caught making this affirmation more than once.

The new O.C.G.A. § 40-6-241 appears to be a significant improvement in terms of making Georgia's roads safer by making our state a "hands-free" state to combat distracted driving. According to the CDC, approximately nine people are killed and over 1,000 are injured each day in the United States because of car crashes involving a distracted driver. In 2015 alone 3,477 lives were lost and 391,000 people were injured in United States automobile crashes involving a distracted driver. Let's hope this new law will make our roads safer and protect the lives of everyone on Georgia's roadways.

If you or a loved one have been seriously injured or a loved one was lost in a traffic collision, please contact Gwinnett County based personal injury and wrongful death lawyer Richard Armond at (678) 661-9585 for a free consultation or fill in your contact info here.

Attorney Richard Armond of The Armond Firm, LLC, handles serious personal injury and wrongful death cases throughout metro Atlanta and the State of Georgia. He is licensed to practice law by the State Bar of Georgia and is based in Lawrenceville, one mile down the road from the Gwinnett Justice and Administration Center. Call him today for a free consultation at (678) 661-9585. The information above is for informational purposes only as of the date of publication and should not be relied upon as legal advice, nor does the reading of it form an attorney-client relationship. Always consult directly with an attorney for legal advice.

Photo by Alexandre Boucher on Unsplash

Thank you for contacting us. We will get back to you shortly.

Please complete all required fields below.

The Armond Firm LLC is committed to answering your questions about Personal Injury and Estate Law issues in Georgia.

I'll gladly discuss your case with you at your convenience. Contact Me today to schedule an appointment.